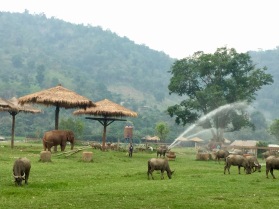 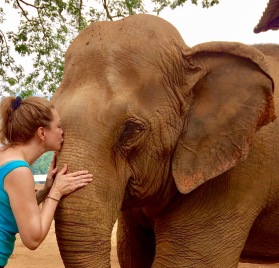 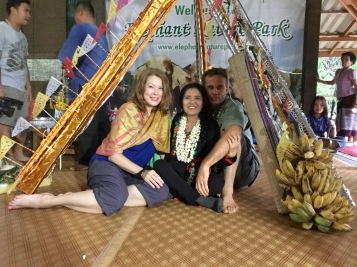 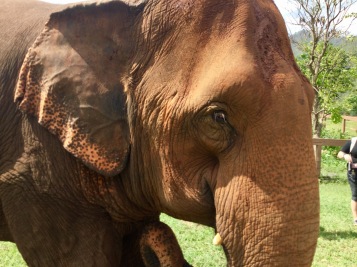 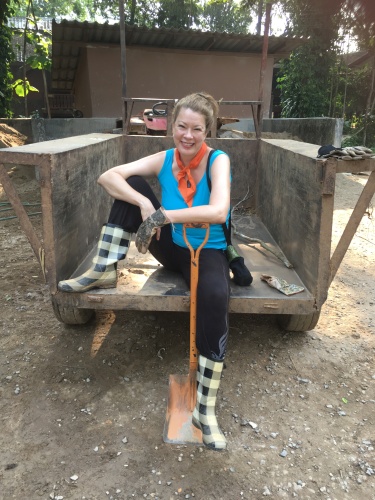 Left to right and top to bottom: One of the elephants munching on some greens, some shady spots and sprinklers for the elephants to play in, me -kissing my beautiful Kabu, me with Lek and her husband, Darren who run the park, Lek being hugged by one of her babies, Sri Prea, (Navann’s mum) flirting with me in the meadow one afternoon, me feeding Kabu while she was nursing a foot infection due to an injury she suffered in the logging industry, and finally, me getting ready to shovel truckloads full of elephant poo. (Trust me, it was a lot more fun than it sounds!)

FOREWORD
Question: How can you possibly communicate an utterly life-changing experience in a short web article?
Answer: You can’t. I’ve tried for months to write something that could communicate how profoundly my life was changed by the week I spent volunteering at Elephant Nature Park animal rescue, and I finally realized it’s impossible. All I can do is give you a glimpse of a sliver of the power of that place. So…that’s what I’m going to do.

If it will help, I can tell you that if you were to ask me the absolute best thing I’ve ever done in my life, I’d have to say it was traveling to the jungles of northern Thailand by myself — to volunteer at Elephant Nature Park for a week. It was, simply put, the most beautiful experience I’ve ever had in my life and it fed my soul to a breadth and depth that I didn’t know was possible.

Being a part of this special place, even for just a week, was so profound that it’s taken me months to be able to put my feelings into words. In fact, I haven’t written a single article since my visit there.  I was too intimidated to try to communicate the “perfectness” of that hauntingly beautiful, other-worldly place.  At the same time, I couldn’t make myself write about anywhere else until I had paid tribute to it.

Elephant Nature Park, is a true rescue, not just some tourist factory that markets itself as a sanctuary while still chaining up the animals and offering elephant rides. ENP is a tangible “heaven on earth” for rescue elephants, more than 72 of them, in fact. Not only that — they also house more than 530 rescue dogs and 80 water buffalo. In addition, they have a separate rescue in the mountains for the over 200 wild boar that would have been killed if not for the sanctuary’s intervention. The main park, however, is where the elephants and water buffalo roam freely through the grounds together with about twenty of the more senior, rescue dogs gleefully chasing each other through the grass. It is a magnificent sight to see all of these different animals (and people) nosing up to each other and spending their days lounging in the sun.

This “Garden of Eden” is the brainchild of a remarkable woman named Lek Chailert. A five foot tall, 95-pound powerhouse of a woman, she started fighting for the rights of working elephants years ago, and the culmination of her vision is Elephant Nature Park– a world-renown conservation project and preserve. When I call her “remarkable” I mean it quite literally. While I was there, I learned she had broken her hip months earlier but had absolutely refused to take time off to treat her injury. There was no way she was going to stop feeding, coaxing and tending to her elephants one-on-one, due to her deep and abiding belief that bonding with these beautiful animals is the best way to gift them with a new life, helping them to trust not only their environment, but humans again — after all the gross abuses they suffered in their lives before arriving at ENP. She was still in great pain and walking with a cane while I was there, but every day she still went out to “play” with her elephants, and every single one of them adores her. When they see her, they come running.

Lek makes sure that Elephant Nature Park has everything these magnificent animals need in order to recover and thrive. The first thing that happens when a new elephant arrives is that they get their own, private caregiver called a mahout, whose entire job is to follow his elephant around 24 hours a day, and simply be his buddy. But that’s only the beginning. The park itself is designed to cater to the elephant’s every need and desire. There are sprawling grasslands, concrete swimming pools, big, cooling mud baths, and many long, winding foot paths to walk. (Did you know that elephants will walk along a dirt path when there is one available in order to preserve the grasslands of their environment? Well, they do.)

The entire preserve is covered with bright green meadows, peppered with lush trees and dotted with watering holes, tire swings, and shady spots. There’s even a crystal clear river where the elephants bathe with the help of the volunteers. It is a breathtakingly beautiful home for these rescued elephants where they are given plenty of fresh food, medical care and best of all…freedom. Freedom they’ve never before experienced. These elephants have been exposed to untold horrors, but whatever their age or circumstance, here they’ll get to live out the rest of their days in freedom and security.
Elephants are not solitary creatures. When left alone in the wild, they live with their families their entire lives. But since this is a rescue, virtually every elephant here has been ripped from their family and forced into hard labor. One of the most important things that happens when these elephants arrive, is that they are encouraged to form new families with the other rescues, families from whom they will never be separated from again. They will roam around the grounds of this sanctuary together in peace — for the rest of their lives.

Here, the air is clear and the ground is soft. The food is plentiful: always clean, ripe and fresh. Truckload after truckload of pumpkins, melons, bananas and cucumbers are delivered every day. The staff at ENP even makes rice balls each day for the elephants who have lost their teeth as a result of either torture or neglect. The kitchen keeps the menu constantly changing so the animals don’t get bored. (Can you believe that?)

This park is a place where every animal feels peace, sometimes for the very first time in their lives. Here, they are safe and loved — respected and valued. When you volunteer here, you can’t believe the amount of love you feel pouring out of you. Just standing next to an elephant is pure joy. When you get really close to one, they always look you in the eye. You see a depth of understanding there — a recognition. They acknowledge that you’re sharing their space with them and they take the time to really see you, to feel who you are. It’s not like looking into the eyes of any other animal — they are truly with you while you are there, and they are in no hurry to leave you. If you pay attention to them in those moments, you’ll learn how beautiful it is to just be with someone…sharing space together.

Standing there, eye to eye with one of these huge, calm, compassionate creatures makes you feel connected not only to yourself and to them, but to God. It gives you a sense of your place in the world. It’s simply impossible to be unmoved by these beautiful animals — and the woman who gave them a chance to simply “be.” Once you’ve actually seen an elephant just be an elephant, you never want them to do anything else. The idea of their being forced to perform tricks or give rides…or even the thought of their being torn away from their families to make someone a few bucks makes you feel sick inside.

After you have shared even one genuine moment with an elephant, you will forever be on their side — praying for their happiness and grateful just to have been a witness to their easy, quiet strength. And you will be forever grateful for the work that Elephant Nature Park is doing. So…

As it turns out, heaven really IS a place on earth, at least for elephants. And it’s nestled among the northern mountains of Thailand, just about an hour and a half from Chiang Mai.   I thank God for the opportunity to have witnessed their lives there, even for just a moment. (If you ever want to shake up your life — or just feel like you’ve visited the Garden of Eden for a week or so, do yourself a favor and volunteer at Elephant Nature Park. You’ll never look at the world the same way again. I guarantee it.)

Notes:
To make a donation or volunteer at Elephant Nature Park, click on their link: ‪https://www.elephantnaturepark.org‬